Organizers for the 3rd annual Mad Hatters’ Parade and Tea Party were delighted by the more than 500 people who came to enjoy this year’s festivities in Maple Ridge. Throughout the day, attendees were served tea, scones, and other goodies provided by Fairmont Hotel Vancouver – items perfect for an afternoon tea party! Lisa Rae Simons, who led this year’s Parade of Hats, kept everyone entertained along with clowns, face painters, and supplies-at-the-ready for people to make hats for the Parade of Hats – all in the name of changing the face of mental illness.

Like the many families involved with BCSS, D’Eith’s parents tirelessly advocated for his brother with mental illness. D’Eith continued to speak about his own personal experiences with mental illness in his family. D’Eith also reminded everyone that “if you don’t have an advocate for you, as someone with mental illness, you can fall between the cracks, and that’s what we’re seeing a lot of throughout our communities.”

Ruimy also shared a touching poem that he wrote himself. Both reiterated the need to challenge and break the stigma that surrounds our loved ones who suffer from mental illness.

A special thanks goes out to the following people and organizations for their support and donations: Haney Farmer’s Market, Maple Ridge Downtown Improvement Association, City of Maple Ridge, Chances Casino, Act and Envision Financial, Remax Realty, and the many other people who donated time, talent, and dollars.

“Without you all, we would not have been able to have such a successful event,” says Catherine Larnon-Trout, key organizer for the annual Mad Hatters’ Parade and Tea Party. “With your support and attendance, next year it will be even bigger and better because YOU will be there… come out, be brave, let’s get noticed…we deserve it!” 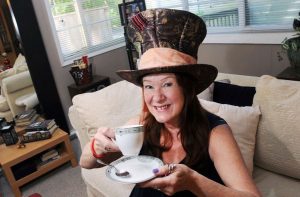 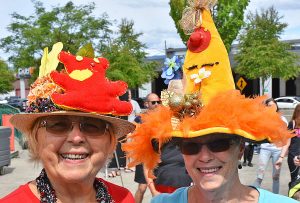 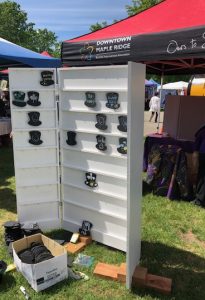 If you’re interested in hearing more about next year’s Mad Hatter’s Parade and Tea Party, email Catherine directly at scotcat@shaw.ca.